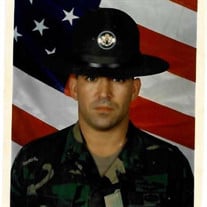 Scott Christopher Manns, 54, of Fairmont, WV, passed away on Monday, November 16, 2020, while surrounded by his loved ones at the Lexington Medical Center in South Carolina. Scott was born at the Myrtle Beach Air Force base in South Carolina on October 4, 1966, to Ersel Manns and Susan F. Manns. He was raised in Fairmont, WV, and graduated from Fairmont Senior high School (FSHS) where he lettered in Wrestling and competed in Pole Vault for the Track and Field team. At the age of 17, he left his country roots behind to pursue his dream of becoming an Airborne Infantryman in the United States Army. Scott started his military career in August of 1984, and after Infantry and Airborne training in Fort Benning, GA, he arrived at the 82nd Airborne Division in Fort Bragg, NC. He was assigned to the 325th Airborne Infantry Regiment and served with Bravo Company, 3rd Battalion in Vicenza, Italy, and then served with Alpha Company, 1st Battalion in Operation Desert Shield “Desert Storm” during the Gulf War. His next assignment was in Mannheim, Germany with the Allied Mobile Forces- Land Component before being stationed at Fort Benning, GA as a Drill Sergeant with the Alpha Co., 2nd Battalion, 58th Infantry Regiment, during which was known as the “House of Pain”. Scott then served in Fort Wainwright, AK with the 2nd Battalion, 1st Infantry Regiment before his last assignment in Fort Jackson, SC. He honorably retired after 21 years of service in October of 2005. During his service, Scott was received many awards to include the Meritorious Service Medal, the Army Commendation Medal, Army Achievement Medal (3 awards), Army Good Conduct Medal (6 awards), National Defense Service Medal (2 awards), Global War on Terrorism Service Medal, Southwest Asia Service Medal with 2 Bronze Service Stars, and the Kuwait Liberation Medal. He was also awarded the Non-commissioned Officer Professional Development Ribbon with numeral 2, Army Service Ribbon, and Overseas Ribbon (3 awards). He also earned badges that included the Combat Infantry Badge, Parachutist Badge, Air Assault Badge, and the Drill Sergeant Badge. He will be forever remembered for his love and devotion to his family as well as the state of West Virginia. He was a humble and selfless man with an infectious laugh and the ability to enrich every life he touched. He was respected by his soldiers for his leadership and was trusted by his subordinates, as well as his superiors. Scott was a combat veteran that was proud of his service to our country and the men he was able to serve with. During the 21 years in the Military, Scott experienced many extraordinary adventures and was able to tell his stories in such a manner that had others laughing so hard it would bring tears to their eyes, and even a loss of breath. His friends and family considered him to be everything good in the world and more. Scott is preceded in death by his father, Ersel Manns, and survived by his loving wife of 35 years, Patricia Y. Manns; his son, Scott Christopher Manns II, and daughter, Sarah Renee Manns; mother, Susan F. Manns; sister, Lee Anne Burton and family; and brother, Gregory Manns, and family. A memorial service for Scott Christopher Manns will be held at the family’s residence in Leesville, SC on November 28 at 2:00 pm. Please contact the family or friends of the family for directions. A Military Honors Detail will be present to honor Scott’s service to our country. The Department of Defense requires that facial masks be worn in addition to social distancing be practiced during their attendance at the ceremony. Please comply with this requirement. In lieu of flowers, charitable donations can be made to the Wounded Warriors Project, P.O. Box 758516, Topeka, Kansas 66675-8516.

Scott Christopher Manns, 54, of Fairmont, WV, passed away on Monday, November 16, 2020, while surrounded by his loved ones at the Lexington Medical Center in South Carolina. Scott was born at the Myrtle Beach Air Force base in South Carolina... View Obituary & Service Information

The family of Scott Christopher Manns created this Life Tributes page to make it easy to share your memories.

Scott Christopher Manns, 54, of Fairmont, WV, passed away on...