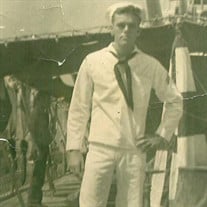 The funeral service for Tommy Dean Blanchette, 84, of Irmo, will be held at 2:00 p.m. this Wednesday, April 6, 2022, in the Chapel of Temples and Halloran Funeral Home, 5400 Bush River Road, Columbia, S.C. 29212. Entombment will follow the service in Bush River Memorial Gardens Mausoleum with U.S. Navy honors. The Blanchette family will receive friends beginning at 1:00 p.m. The Reverend David Anderson, of Union United Methodist Church, will officiate. Serving as active pallbearers will be Brian French, Jerry Cox, Michael French, James Williams, Tim French, and Andrew Metze. Tommy was born on October 7, 1937, in Camden, S.C., and departed this earthly life on Saturday, April 2, 2022, at his residence surrounded by his loving family. He was born to parents Fred Ranson Blanchette and Ada Juanita Thompson Blanchette. Tommy was a graduate of Irmo High School and later attended Spartanburg Methodist College. Following his college days, Tommy proudly served his country in the U.S. Navy. After his military service, Tommy went to work for the General Electric Plant in Irmo and retired after many years. While at General Electric, Tommy met his wife of 62 years, Sophie. Tommy loved all activities on Lake Murray and realized he was blessed to live on the lake and share his home with others to enjoy. Tommy was a loving husband, father, grandfather, brother, and uncle who will be dearly missed by all. Mr. Blanchette was a lifetime member of the Union United Methodist Church in Irmo, S.C. Those surviving Mr. Blanchette include his devoted wife, Sophie; a son, Russell D. Blanchette (Lisa) of Pomaria, S.C.; sisters, Gail Cox (Tom) of Crystal River, F.L., and Sherry French (Doug) of Little Mountain, S.C.; and two grandchildren, Tyler D. Blanchette, and Lauren A. Blanchette; and by many nieces and nephews. Those who preceded him in death include his parents and one brother, Everett R. “Buck” Blanchette. The Blanchette family strongly urges memorials in lieu of flowers be made to the Alzheimer’s Association, 225 N. Michigan Ave. Floor 17 Chicago, IL 60601 or a charity of their choice.

The funeral service for Tommy Dean Blanchette, 84, of Irmo, will be held at 2:00 p.m. this Wednesday, April 6, 2022, in the Chapel of Temples and Halloran Funeral Home, 5400 Bush River Road, Columbia, S.C. 29212. Entombment will follow the... View Obituary & Service Information

The family of Tommy Dean Blanchette created this Life Tributes page to make it easy to share your memories.

The funeral service for Tommy Dean Blanchette, 84, of Irmo, will...