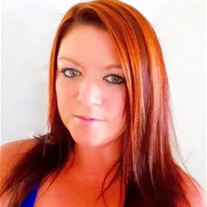 LITTLE MOUNTAIN—Tracy Cannon Scherberger, 32, of Little Mountain, died peacefully in the presence of her loving family in Lexington Medical Center on November 26, 2018, after a brave and lengthy battle with liver disease. Born March 14, 1986, in Rochester, NY, she is the daughter of Nancy Cannon Scherberger and the late James Richard Scherberger. She is predeceased by grandparents, Dr. Edward & Dorothea Cannon. In addition to her mother, she is survived by her daughter, Peyton James Scherberger and brother, James Scherberger (Lexington). Tracy attended Dutch Fork High School where she reached the rank of Group Commander in the JROTC. She was an avid hockey player. Prior to her illness, she had been employed by her beloved second family; the VFW Post 6740. She enjoyed spending time with Peyton, activities on Lake Murray, music, Gamecock football and most of all - helping others. She was well known in the Irmo/Chapin community and her warmth and enthusiasm will be sorely missed by many. The family would like to thank the dedicated staff at Lexington Medical Center for their superb care and compassion facilitated during her lengthy illness. Memorial services for Tracy will be held at Temples Halloran Funeral Home Chapel, 5400 Bush River Rd., Columbia, SC 29212 on Sunday, December 2, 2018. The family will receive friends from 11:00 AM - 1:00 PM followed by Tracy's service scheduled for 1:00 PM. Numerous local businesses, musicians and friends have organized a benefit in Tracy's honor directly following her service to be held at Hemingway's in Irmo. All contributions are directed to a scholarship fund created in Peyton's name. In lieu of flowers, memorials may be made in Tracy Cannon Scherberger's memory to: Peyton Scherberger Scholarship Trust c/o Brian Nalepa 520 Bear Creek Rd. Chapin, SC 29036

The family of Tracy Cannon Scherberger created this Life Tributes page to make it easy to share your memories.