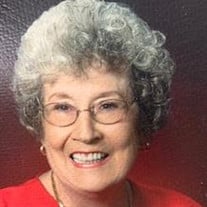 COLUMBIA—Virginia Ann Rumsey Wood, 81. A funeral service will be held at 2:30 p.m. Wednesday, December 4, 2019 at Temples Halloran Funeral Home Chapel, 5400 Bush River Road, Columbia, SC 29212. Burial will follow in Bush River Memorial Gardens. The family will greet friends from 2:00-2:30 prior to the service at the funeral home. Virginia passed away peacefully on November 25, 2019. Born in 1937 in Greer, SC, she married her childhood sweetheart, Donald Reginald Wood in 1955 and was a proud mother of 2 daughters and grandmother of 4 granddaughters. Virginia moved to Irmo, SC in 1966 where she soon started a career in banking with South Carolina National Bank. She became an Executive Senior Vice President with SCN and a top lender in the state of SC. Her career spanned over 25 years and she retired from Wachovia as the Columbia City Executive. She was a graduate of the South Carolina Bankers School at USC. She held offices as Chairman and President for American Business Women’s Association Liberty Tree Chapter, Ambassador for the South Carolina Chamber of Commerce, Chairman of United Way Small Business Division and an Instructor for the American Institute of Banking. She was a member of the Columbia Chamber of Commerce, Vista Beautification Group, American Management Society, Columbia Action Council, and Central Business Alliance. In 1990, the Columbia YWCA honored her at the Women and Industry celebration. She was a member of Riverland Hills Baptist Church for more than 50 years where she was a member of Faith Sunday School Class, J.O.Y. Club and served at the Welcome Desk. She was a devoted Christian, a savvy businesswoman and an exceptional role model for her daughters and granddaughters. Virginia was preceded in death by her parents, Lonnie and Pauline Rumsey; siblings, Herbert, Edith, Freeman, Francis, Glen, Jim and Evie Sue; and granddaughter, Mary Ann Assemany. She is survived by her beloved husband of 64 years, daughter, Kim Assemany (Danny), daughter, Phyllis Satcher (Christopher), and granddaughters, Paige, Emily Ann, and Olivia. In lieu of flowers, donations may be made to Riverland Hills Baptist Church, 201 Lake Murray Blvd., Irmo, SC 29063. The family would like to thank the staff at Richland Memorial Hospital and Carolina Gardens Harbison for their loving care.

The family of Virginia Ann Rumsey Wood created this Life Tributes page to make it easy to share your memories.