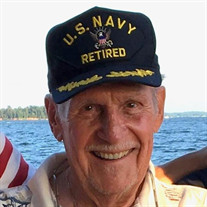 William Eugene Bigler, Jr., known to you as Bill Bigler, passed into heaven on September 30, was born February 11, 1935, in Willoughby, Ohio, and grew up there, son of William Eugene and Eileen Tolford Bigler, brother of Jean Bigler Edwards. Bill graduated from Cleveland Heights High School, enlisted in the Navy to serve his country, then went on to graduate from the University of Maryland with a BS in Electrical Engineering, and earned his Masters Degree at George Washington University. He is preceded in death by his wife of 59 years, Lynn R. Bigler, and survived by his daughter Janis Merle Bigler Houlihan and her husband Martin Mark Houlihan now of Davidson, NC; son Jason William Bigler and his wife Laura Gay Bigler now of Dacula, GA; and four grandchildren: Kacey Leigh and John “Jack” William Houlihan, Haley Elizabeth and Anna Marie Jones. Upon his graduation from high school, Bill enlisted in the Navy where he spent time training and serving in San Diego and Pensacola among other cities. Bill worked as a flight simulator instructor which propelled him toward working on an engineering degree after he was discharged from the Navy in December of 1957. That same month, Bill was set up on a blind date with Marilyn Carol Ray (known to you now as Lynn Ray Bigler). In January 1958, Bill enrolled at the University of Maryland to pursue a degree in engineering. Eight months later in August 1958, Bill and Lynn were married and had moved to Maryland where Lynn taught middle school while working toward her Master's degree in Secondary School Counseling at the University of Maryland. After Bill graduated with his BS in Electrical Engineering, he began work in the private sector while earning his Masters Degree at George Washington University. Bill’s next great accomplishment was to found the defense contracting firm QuesTech (1968) with a small group of trusted colleagues. Together they worked on defense and intelligence projects for the United States Government as well as developing technology for the Space Shuttle program. Bill held several senior leadership positions during his career at QuesTech retiring in the late 1980s but he continued to do consulting work for several more years. Bill was a member of Eta Kappa Nu (the international honor society of the Institute of Electrical and Electronics Engineers), a member of the Association of Old Crows (a professional organization for those who work in the defense industry), and a lifetime member of the Harley Owners Group. In August of 1967, Bill and Lynn welcomed their first child, a daughter. They moved to Potomac, Maryland in 1968 where they built their first home. Three years later they were blessed with a son (1971). They lived in Potomac for 26 years before retiring to South Carolina in 1993 where they discovered their love of the theatre and lake living. Bill and Lynn raised two beautiful children, Janis Merle Bigler Houlihan (1967) and Jason William Bigler (1971); who, in turn, blessed them with four beautiful grandchildren: Kacey Leigh Houlihan (19), John “Jack” William Houlihan (16), Haley Elizabeth Jones (13), and Anna Marie Jones (9). Bill has had many great loves in his life: his wife and soul mate Lynn of 59 years, the Navy, cruising on his Harley Davidson motorcycle, the MG convertible he lovingly restored by hand and supporting Lynn’s volunteer work at their churches (Potomac Presbyterian Church [25 years] and Lake Murray Presbyterian Church [22 years]). Together with his children and Lynn, Bill camped all over the East Coast from Maine to the Florida Keys. A favorite campground that was returned to year after year was Maddox Family Campground on Chincoteague Island, Virginia. After the children left the nest, Bill and Lynn began to do more extensive travel in the countries of Western Europe and sailing in the Caribbean. Bill’s life was one filled with love, family, pets, adventure, travel, churches, dear friends, and wonderful neighbors. Memorials may be made to Lake Murray Presbyterian Church, 2721 Dutch Fork Road, Chapin, SC, 29036. A Private Family Service will be held for Bill on Friday, October 16, 2020 in Elmwood Cemetery Mausoleum. The Reverend Dr. Ben Sloan will officiate.

William Eugene Bigler, Jr., known to you as Bill Bigler, passed into heaven on September 30, was born February 11, 1935, in Willoughby, Ohio, and grew up there, son of William Eugene and Eileen Tolford Bigler, brother of Jean Bigler Edwards.... View Obituary & Service Information

The family of William "Bill" Eugene Bigler, Jr. created this Life Tributes page to make it easy to share your memories.