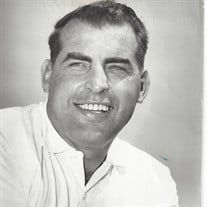 Columbia—William A. “Coach” Shalosky, born September 23, 1931 in Louisville, Ohio, passed away peacefully in Columbia, SC on Friday, December 14, 2018. Coach grew up in Louisville, Ohio, graduating from high school where he lettered in both track and field and football. He received a football scholarship to the University of Cincinnati. He lettered again in both track and field and football. There he held many records including the longest distance in the shot put. He was an All American offensive guard and played in the East/West Shrine Bowl Game. His coach, Sid Gilliam, once said “Bill was the greatest lineman to ever play for the University of Cincinnati”. His jersey, #29, is retired, and he is in the University of Cincinnati’s Hall of Fame and Ring of Honor. He was a member of Sigma Chi fraternity. After graduating from college he was drafted into the United States Army and rose to the rank of 2nd Lieutenant. While in the army, he was called to the West Point Academy by Col. Blaik to coach the Plebes with Coach Doc Blanchard. After serving, he left to coach football at the University of Cincinnati under Coach Geo Blackburn. Later he would go on to coach under Head Coach and close friend, Paul Dietzel, at Louisiana State University, the United States Military Academy, and the University of South Carolina, where he was both the offensive line coach and offensive coordinator. Coach also was the Golf Coach and Assistant Athletic Director. It was a career that spanned almost 20 years. He retired from athletics and went to work in sales for The Ohio Knife Company and the Darnell Company. Coach is survived by his devoted and loving wife of 64 years, Rita, son Michael G. Shalosky (Susan), daughter Kathy J. Hall (Craig), granddaughter Michael K. Smanz, grandsons William A. Shalosky (Taylor), and William Patrick Hall (Kelly). Coach’s funeral will be at 11:00 a.m., Saturday, January 5, 2019 at Our Lady of the Hills Catholic Church, 120 Mary Dale Ln., Columbia, SC 29210. In lieu of flowers, donations can be made in his memory to Leeza’s Care Connection (Leezascareconnection.org)

The family of William A. "Coach" Shalosky created this Life Tributes page to make it easy to share your memories.