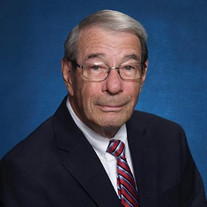 Columbia – A celebration of life service for William David (Bill) Swygert, 85, of Columbia, will be held at 2:00 pm on Saturday, January 12th at Union United Methodist Church, 7582 Woodrow Street, Irmo, SC 29063. Reverend Stephen Taylor will officiate. Interment will be held at a later date at Bush River Gardens Cemetery. Bill, the beloved husband of Patricia Ruth Graves Swygert, passed away at home on Friday, 12/21/2018. He was the son of the late Burly Royal Swygert, Jr. and Nena Caughman Swygert. He was a longtime member of 25+ years at Union United Methodist Church and the AL Fellowship Sunday School and a graduate of Columbia High School, class of 1951. He proudly served his country in the United States Air Force at Congaree AFB during the Korean conflict and was privileged to go on a Veterans Honor Flight in 2012. Bill had a distinguished career of over 40 years in the newspaper and advanced computer system fields. He started with the Columbia State Record, worked his way up at the Charlotte Observer, and was later recruited by the Raytheon Corporation and the Chicago Tribune, before retiring back to Columbia. He loved spending time with family and friends and fishing was one of his most favorite pastimes. Surviving in addition to his loving wife of 63 years, Patricia “Pat” G. Swygert; daughter, Sheila Swygert McCoy (Ron) of Charlotte, NC; sisters, Cornelia S. Lewis (Ted) of Columbia and Jacquelyn S. Lucas (Jim) of Columbia; grandchildren, Lauren Schleusner (Alex), Sarah Finerty (Shane), Jessica Swygert, Kathryn Weeks, Rebecca Love, Rachel Wilder and Zach Mangum; great-grandchildren, Norah Grace Schleusner, Dak Weeks, Lucy Cooper Love, Ruthie Love and King Wilder. Those who preceded him in death besides his parents was his son, William David Swygert, Jr.. In lieu of flowers, memorials may be made to Union United Methodist Church, 7582 Woodrow Street, Irmo, SC 29063.

The family of William D. Swygert created this Life Tributes page to make it easy to share your memories.

Columbia – A celebration of life service for William David (Bill)...