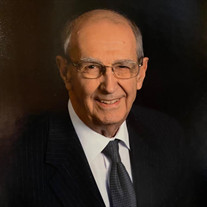 William T. “Bill” Putnam died Saturday, May 22, 2021, in Murfreesboro, TN. He was born July 30, 1926, in Florence, SC to the late Bluford Hugh and Lucy Rose Self Putnam. He attended Florence schools, the Citadel, and graduated from the University of South Carolina in 1948. He served in the United States Army Air Corps during World War II. Bill married Elizabeth “Betty” Burch Harrell in 1951 in Florence, and they moved to Columbia, SC in 1953 where he enjoyed a long career in SC state government. He worked for the SC State Tax Commission from 1953-1966, became the Assistant SC State Auditor in 1966, SC State Auditor in 1976, and was appointed the Executive Director of the SC State Budget and Control Board from 1980-1986. After retirement, he served on the Palmetto Health Board of Trustees and was president of his own consulting firm, Governmental Associates, Incorporated. Bill and Betty were long-time members of St. Andrews Baptist Church in Columbia where Bill served as deacon, trustee, RA leader, and Sunday School teacher. Bill was a master storyteller, gathering anecdotes from his own life and those of his friends and family. His distinctive southern drawl, his gentlemanly demeanor, his ability to discuss hard topics in a diplomatic way, and his devotion to his Lord, his family, and his church were hallmarks of his life. Bill was predeceased by his wife, Betty, and his son, William Thomas Putnam, Jr. He is survived by his daughter Susan Putnam Wilson of Murfreesboro and her husband Mark Wilson, daughter-in-law Jackie Putnam of Columbia, SC, grandchildren Laura (Colonel Bart) Kenerson of Tucson, AZ, Ashlee Putnam of Murfreesboro, TN, William M. (Lisa) Putnam of Blythewood, SC, Christopher T. Putnam of Columbia, SC, Dr. M. Andrew (Heidi) Wilson of College Station, TX, and Amanda (Anthony) Babbitt of Montreal, Quebec. He is also survived by 13 great-grandchildren, and much-loved nieces and nephews. The funeral service will be at 11:00 a.m. on Saturday, May 29 at St. Andrews Baptist Church, 230 Bush River Road, Columbia, SC. Visitation will be one hour before the service with burial afterward at Bush River Memorial Gardens. The family suggests that any memorial gifts be given to St. Andrews Baptist Church, 230 Bush River Road, Columbia, SC, Smile Train, or any organization of your choice.

The family of William T. "Bill" Putnam created this Life Tributes page to make it easy to share your memories.