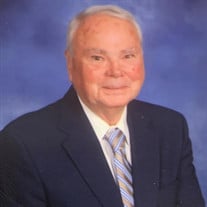 William James Rampey, Sr, 85, of Columbia, South Carolina died Sunday, June 27, 2021. He was born August 14, 1935, in Darlington, South Carolina, the son of the late William Preston Rampey and Magdalene Williams Rampey Denny.   Jim was a 1954 graduate of McClenaghan High School in Florence, SC where he played football and was named to the 1952 SC ALL State team. He went on to graduate from Wofford College in Spartanburg, SC in 1958 with a Bachelor of Arts degree in Psychology. Jim was a standout football player for the Wofford Terriers where he played guard. He was routinely earning accolades and praise for his mental and physical toughness. He was even named to the 1957 Little All- American team while at Wofford. After college, Jim joined the Army and upon completion of OCS entered the Army Reserve serving for nine years as Captain in the Infantry. While serving his country in the Reserves, he began his 35-year career in finance and retired from Citicorp in 1995. Jim enjoyed Scuba Diving, the outdoors, and playing cards. He was an avid historian interested in U.S. military history and World War II in particular. He was skilled in the art of storytelling fascinating listeners with stories of his youth, family, and historical events. Jim was an active member and past officer of his homeowners' association. He really enjoyed playing bridge on a regular basis with his neighborhood girls and the Panera Bridge club. Jim also loved the quarterly dinners with his neighborhood crew. In addition to his parents, Jim was preceded in death by his wife, Nancy Carroll Rampey. Survivors include his wife, Taska Martini; children, William J. Rampey, Jr, (Alessandra), Teresa Rampey Gantt (Stephen), and Todd Rampey (Angela); stepchildren, Tracy Dempsey (Reid) and Thane Martini (Sandi); grandchildren, Bailey (Jared) Spears, Courtney Rampey, Sydney Rampey, Douglas Gantt, Dana Gantt, Preston Rampey, Peyton Rampey, Hannah Rampey, and Hailey Rampey; step-grandchildren, Allison Dempsey, Christin Dempsey, and Grant Martini. The family would like to thank Deepwood Estates, Amedisys Hospice, and Affinity Caregivers of SC, especially Monica, Gloria, Jacque, Nikki, and Bridgette for their excellent care. Jim’s memorial service will be at 11:00 am on Saturday, July 3, 2021, at Temples-Halloran Funeral Home, Bush River Road, Columbia, SC. The family will greet friends following the service. In lieu of flowers, memorials can be made to Wofford College (wofford.edu) or Fisher House (fisherhouse.org) in Jim’s honor.

The family of William James Rampey, Sr. created this Life Tributes page to make it easy to share your memories.