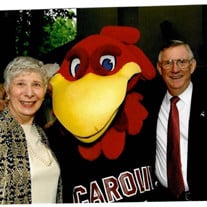 COLUMBIA – Virginia “Ann” Smith Burks of Columbia, SC went home to be with the Lord on October 8, 2021. Mrs. Burks was born in Orangeburg, SC on September 23, 1940. She was the daughter of the late James Wallace Smith and Virginia Myers Smith, and sister of the late Captain (USAF-retired) Edward Wade Smith. Survivors include her son, Brigadier General (USAF-retired) James Jackson “Jay” Burks and his wife Valarie; nephew Edward Wade Smith II and his wife Peggy; and granddog Jersey. Ann was predeceased by her husband, George Jackson “Jack” Burks, Jr. and beloved family dog “Maggie.” Ann and Jack were married in 1959, and they lived in the Columbia area nearly their entire married lives. They were longtime members of Riverland Hills Baptist Church, beginning their active life in the church during its early days in the 1970s. Along with Jack who was a Gideon, Ann was a member of the Gideon’s International Auxiliary, offering prayer and support in spreading the Good Word. Ann was engaged in her community as a member and officer in the Junior Woman’s Club of Columbia. Notably, Ann found her place on the stage during the historic Red Stockings Reviews, contributing her talents to entertain the community and raise funds for children’s and youth services. Ann worked throughout her adult life, and made her greatest impact as Secretary to the Principal at Irmo Middle School. For nearly two decades, she gave love and encouragement to students, many of whom had been “sent to the principal’s office,” positively influencing the lives of many youth. After retirement, Ann and Jack enjoyed extensive travel, dancing, spending time with treasured friends, and serving their Sunday School class and church. The family wishes to extend our heartfelt gratitude to dear friends as well as Brookdale-Harbison for their compassion, care, and support. Out of an abundance of public health caution, in lieu of a visitation, a viewing will be held on Monday, October 11, 2021 from 2:00 p.m. to 5 p.m. at Temples-Halloran Funeral Home. The family will hold a private graveside service officiated by Dr. Ryan Pack, and asks others to pause for a moment to reflect on what Ann meant to them. In lieu of flowers, memorials may be made to Riverland Hills Baptist Church, 201 Lake Murray Blvd, Irmo, SC 29063; Gideons International (Richland County), 5106 Two Notch Road #B, Columbia SC 29204; and/or Pawmetto Lifeline, 1275 Bower Parkway, Columbia SC 29212. Online condolences may be sent to www.templeshalloranfuneralhome.com.

The family of Ann Smith Burks created this Life Tributes page to make it easy to share your memories.