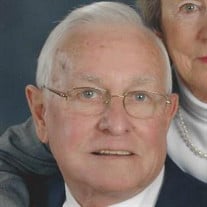 COLUMBIA—Carl Edward Lee, Jr., 86 of Columbia, passed away on March 13, 2018 in Columbia. Carl Lee was born on February 19, 1932 in Kinston, NC to his parents, Carl Edward Lee, Sr. and Mary Barwick Lee. Carl married Mary Sue Clay in 1954. The Lees moved to several North Carolina cities where Carl pursued his love of printing. He retired from the R. L. Bryan Company at 65. After retirement, Carl enjoyed the beach, his work and his walking group at the mall, but most of all Carl enjoyed spending time with his beloved wife and his family. He was husband, Daddy, Granddaddy and Opah to all of those who loved him. Carl was a charter member of Redeemer Lutheran Church in Columbia where so enjoyed worshipping with his wife and friends on Sunday mornings. Carl is survived by his wife; daughter, Carla Neeley (Bill); son, Gregory Lee (Lynne); and daughter, Julie Tissler (Helmut); eight grandchildren; and four great-grandchildren with a new great-grandson expected next month. His parents and a brother, Woodley G. Lee preceded him in death. The Funeral service will be held at 11:00 a.m., Friday, March 16, 2018 at Redeemer Lutheran Church, 525 St. Andrews Road, Columbia, SC 29210 with The Reverend Gary Loadholdt officiating. Burial will be held at 2:00 pm in Bush River Memorial Gardens, 5400 Bush River Road, Columbia, SC 29212. The family will greet friends from 10:00-10:50 a.m. in the Narthex of the church prior to the service. Temples Halloran Funeral Home are handling funeral arrangements. The family requests that memorials in Carl’s memory be made to Redeemer Lutheran Church, 525 St. Andrews Road, Columbia, SC 29212. The family wishes to thank the extraordinary staff of the Oncology Unit at Lexington Medical Center for their wonderful compassion and care during Carl’s brief time with them.

The family of Carl E. Lee, Jr. created this Life Tributes page to make it easy to share your memories.

COLUMBIA—Carl Edward Lee, Jr., 86 of Columbia, passed away on...