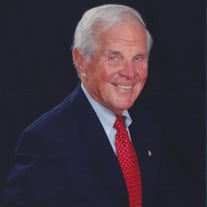 Charles McBryde Jenkins, Jr. was born June 30, 1932, and passed away June 07, 2021. He was born in Old Fort, North Carolina, and was the son of Nan Edwards Jenkins and Charles M. Jenkins, Sr. At the age of four, the family moved to Walhalla, SC where Charlie grew up. He was very active at Walhalla High School, participating in all sports, singing in the Barbershop Quartet, and held class offices. Charlie then attended The Citadel and was a member of the Gold Star Club, the Summerall Guards, and was the Senior Class President. One of his most fond memories was when General Mark Clark became the President at The Citadel Charlie’s senior year. He enjoyed all the stories that General Clark would share with his “advisory committee”. After graduating in 1954, Charlie entered the Air Force. He was based in California and spent the majority of his time training pilots for the Korean War. He served four years and retired as Captain. He flew four more years flying inactive duty reserve. After his military tour was over, he attended Purdue University and received a dual Master Degree’s in both Civil Engineering and Mathematics. He met his wife Marilyn (Sam) while at Purdue, and after dating for two months they married. Upon graduation, they moved to New Kensington, Pennsylvania, where Charlie worked for Alcoa. After several years in Pennsylvania, Charlie worked at jobs located in Ohio, Georgia, North Carolina, and South Carolina. Charlie was a Registered Professional Engineer in Ohio, North Carolina, and South Carolina. He also was an adjunct professor at Midlands Technical College. He enjoyed coaching his son’s baseball and soccer teams. He also served as President of St. Andrews/Irmo Area Council. Upon retirement from the Midlands Technical College, he volunteered for many years at Sharing God’s Love and in the Literacy Program at The Oliver Gospel Mission. He loved playing tennis and did so into his 80’s. Charlie was a member of Union United Methodist Church of Irmo and The Aileen Lightner Fellowship Class. He served as President, Vice President, Stained Glass Committee for the new church and member-at-large. He was also recognized as Man of the Year by Union United Methodist Church. Charlie is survived by his wife of 63 years Sam; son, Matthew (Tamera) of Brooklyn, New York; sister, Betty Jean Aiken of Columbus, Georgia; brother-in-law, Tom Carney of Attica, Indiana; many nieces, nephews, and cousins. Memorial services will be held at Union United Methodist Church, 7582 Woodrow Street, Irmo, SC 29063 on July 9, 2021, at 1 pm. A reception will be held after the service in the Fellowship Hall. For memorial contributions, the family has suggested The Oliver Gospel Mission, Union United Methodist Church of Irmo, or The Citadel Foundation.

Charles McBryde Jenkins, Jr. was born June 30, 1932, and passed away June 07, 2021. He was born in Old Fort, North Carolina, and was the son of Nan Edwards Jenkins and Charles M. Jenkins, Sr. At the age of four, the family moved to Walhalla,... View Obituary & Service Information

The family of Charles McBryde Jenkins, Jr. created this Life Tributes page to make it easy to share your memories.