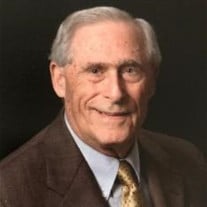 CHAPIN— Charles James Miller, 85, died July 28, 2019. Born in Roanoke, Virginia, he was the son of Paul L. and Lois D. Miller of Gastonia, NC. He is survived by his wife, Peggy Lee Miller of 56 years. Charles was the loving father of three daughters: Anita M. Barradale (Eric) of Ft Mill, SC, Marilee M. Calamas (Peter) of Waxhaw, NC, and Allison M. Free (Brantley) of Chapin, SC. He is also survived by his adoring seven grandchildren: Morgan Barradale McDonald (Dakota), William and Elise Barradale, Lauren and Nathan Calamas, Jakob and Kortland Free. Affectionately known as POP, he was anxiously awaiting the birth of his first great-grandson in October. Charles was a graduate of Gastonia High School, class of 1952, Mars Hill College, class of 1954, and Furman University 1956. After college, he served in the United States Air Force. He was a banker for 38 years and retired from Wachovia Bank in 1997 as Vice President and Trust Officer. Charles was a member of the American Bankers Association National Graduate Trust School Board of Trustees. For 26 years he taught a retirement plan services course at the South Eastern Trust School held at Campbell University. He received the Professional Designation of Certified Employee Benefits Specialists (CEBS) as well as Employee Benefits Certified Trust Professional (EBCTP). As a former member of First Baptist Church, Columbia, he served as a Deacon and Chairman of the Finance Committee where he and his wife taught Couples Sunday School class for 18 years. Charles and Peggy also did mission work in the states and in many foreign countries helping set up schools to train pastors. Charles served as a chaplain for the SC Baptist Disaster Relief Organization for many years as well as a member of the SC Baptist Executive Board. As part of Charles’ gift of teaching, he led monthly Bible studies at Christopher Towers Retirement Community for 36 years. He was also heavily involved in Prison Fellowship Ministry as well as served as the coordinator of Baptist Lay Renewal Ministry. Upon moving to the Heritage at Lowman, he served as a volunteer in many capacities, including Lutheran Hospice. At the time of his death, he and Peggy were active members of Faith Presbyterian Church of Irmo, SC, where he taught Sunday School, served as an Elder as well as a member of Session. Charles and Peggy enjoyed many friendships and activities at the Heritage prior to his death. Although Charles accomplished so much he only wanted to be remembered for his love of the Lord, family, and friends. A memorial service will be held August 9, 2019, at 11 a.m. at Faith Presbyterian Church, 1811 Dutch Fork Road, Irmo, SC 29063. Dr. Karl McCallister and the Rev Dr. Derald H. Edwards officiate. Visitation will follow in the Fellowship Hall. In Lieu of flowers, memorials or gifts may be given to Faith Presbyterian Church or the Heritage at Lowman, PO Box 444, White Rock, SC 29177.

CHAPIN&#8212; Charles James Miller, 85, died July 28, 2019. Born in Roanoke, Virginia, he was the son of Paul L. and Lois D. Miller of Gastonia, NC. He is survived by his wife, Peggy Lee Miller of 56 years. Charles was the loving father of... View Obituary & Service Information

The family of Charles J. Miller created this Life Tributes page to make it easy to share your memories.