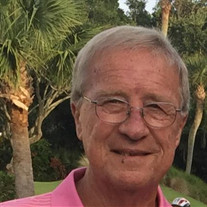 COLUMBIA—The memorial service for Cody Robert “Robbie” Davis, Jr., 73, of Columbia will be held on Friday, July 5th at 11:00 o’clock at Swansea First Baptist Church, Swansea, SC. The Reverend Terry Wilder will officiate. Robbie’s visitation will be held in the church fellowship hall following the memorial service. A private family inurnment will be held at a later date in Bush River Memorial Gardens. Mr. Davis was born October 18, 1945, in Orangeburg County, SC and died on Monday, July 1, 2019, at his residence surrounded by his loving family. He was the son of the late Cody R. Davis, Sr. and Wilma Sturkie Davis. Robbie was a graduate of Swansea High School. He proudly served his country in the U.S. Navy, on the USS Tattnell. Following his service to his country, Mr. Davis began his career with T&T Sporting Goods, with 51 years of service upon his recent retirement. Robbie was an avid golfer and a member of Golden Hills Country Club. He enjoyed spending time with family at Edisto Beach. Survivors include, the love of his life of 47 years, Linda Nelson Davis; daughter, Kelly Davis Sawyer (Todd) of Irmo; son, Steven Davis (Erica) of Chapin; sister, Deborah Rucker (Roddy) of Elloree, who he held dear to his heart; and Eleese Marie Sawyer and Ella Marie Davis, are his granddaughters who he enjoyed spending as much time as possible with. Mr. Davis’ family would like to thank Dr. Steven Madden with Lexington Oncology for his compassionate care. The family would like to thank everyone for all the love and support during his journey. In lieu of flowers, memorials may be made in Robbie’s honor to the American Cancer Society, 200 Center Point Circle, Ste. 100, Columbia, SC 29210.

The family of Cody Robert "Robbie" Davis, Jr. created this Life Tributes page to make it easy to share your memories.