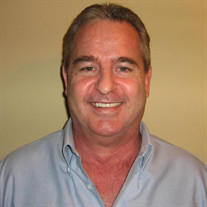 A Celebration of Life service will be held for Curtis “Curt” Legere Williams, 64, Columbia, will be held at 11:00 a.m. Saturday, March 12, 2022, in the Bush River Memorial Gardens Mausoleum Chapel. Born in Columbia, S.C. on August 27, 1957, to his late mother, Lois Jean “Lodi” (Huggins) Williams, and father, Joseph “Joe” Henry Williams. Curt passed on Tuesday, February 22, 2022, in Columbia, S.C. He is survived by his son, Jordan Curtis Williams of Columbia; brothers, Larry T. Williams and Delores (Dee) Camp of Inman, SC, and Joseph R. (Randy) Williams and Sheryl Winter Williams of Jacksonville, Florida, and his ex-wife, Karen Williams of Columbia, S.C., as well as numerous cousins and nephews. Curt graduated from Midlands Technical College in Columbia and worked for Love Chevrolet in West Columbia. He later started Southeastern Automotive Logistics LLC, followed by St. Andrews Express Body Shop which he owned and operated. Curt was a loving father, brother, and son. He could be seen almost daily visiting and aiding his parents when they moved into the Presbyterian Home and was devastated when they passed. Curt was an avid Gamecock fan; so much so that he named his dog Tanner, in honor of Ray Tanner the Gamecock Baseball Coach. He was proud to call Gamecock Football Coach, Joe Morrison a friend and was often seen on the sidelines with him before Joe passed. He loved working on vehicles of all types at his body shop Curt was well respected and will be remembered for his many innovations during that time. He was a scuba diver, parachutist, gun enthusiast, and race car driver to name just a few. He enjoyed watching sports of all types and having conversations with anyone who had time to discuss politics, cars, people, places, or anything else. One of his last projects was helping to advise and guide his brother, Randy as he was restoring his 1963 Chevy pickup. Curt will be missed by many but we take solace in the fact that he is at peace with his savior. The family would like to thank everyone who has expressed their condolences during this time

The family of Curtis "Curt" Legere Williams created this Life Tributes page to make it easy to share your memories.

A Celebration of Life service will be held for Curtis “Curt”...