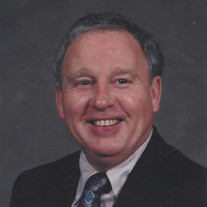 CHAPIN—The funeral service for Danny M. Helms, 79, of Chapin will be held at 2:00 p.m., Thursday, November 16, 2017 at Riverland Hills Baptist Church, 201 Lake Murray Blvd., Irmo, SC 29063. Dr. Ryan Pack and Dr. Don Brock will officiate. Interment will follow in Bush River Memorial Gardens, 5400 Bush River Road, Columbia, SC 29212. The family will receive friends from 12:30 p.m. – 2:00 p.m. in the church sanctuary. Temples Halloran Funeral Home is assisting the family. Born in Lancaster, SC on March 7, 1938, Danny was the son of the late J. C. Helms and Willene Bell Helms. Danny began his career working at Dixie Homes store in Lancaster at age 13. Following high school he worked at Winn Dixie and then later went to A&P Stores. In 1960 Danny was transferred to be produce manager in Columbia. This is where he gained most of his knowledge in the grocery business. From there he went to Piggly Wiggly as produce manager and eventually store manager. He was given the opportunity to try to revive a store in Greenwood, SC. He eventually moved back to Columbia to work at the Trenholm Road Piggly Wiggly. From there he worked for Piggly Wiggly Carolina out of Charleston as a field representative. Danny bought the Piggly Wiggly on Covenant Rd in 1974 where he served his community as owner and operator. During his time at this store he employed his wife and children in addition to many high school and college students. He is fondly remembered by those that he employed as a fair man and one who instilled good work ethic in them. In 1982 and 1983 he served as President of the Food Retailers Association. In 1987 he was chosen by his peers to be grocer of the year. This was the highlight of his career in the grocery business. In 1995 he and his wife retired together from their Covenant Road Piggly Wiggly. He lived the rest of his life with his wife in their home on Lake Murray. During his retirement he enjoyed spending time with his children and grandchildren, fishing, taking care of his yard, and working in his shop. He was an avid Gamecock football fan, being a scholarship donor for over 40 years. He was a faithful servant of our Lord. He was a member of Jackson Creek Baptist Church in the 1960s and 1970s where he was ordained as deacon. He served the church in many roles during his lifetime. All of which he did with great joy. He later worshiped at Gateway Baptist Church where he also served as a deacon. He and his wife were particularly devoted to serving the elderly and widows. In his later years he and his wife have remained members of Riverland Hills Baptist Church. They were involved in Joy club, Oasis and Agape Sunday school class. Even as his health started failing Danny cherished his responsibility as a greeter. Danny also volunteered at Sharing Gods Love until his health would no longer allow it. He strived to put the service of God first in all things. Surviving is his loving wife of 60 years, Frances Adams Helms. Daughter, Robyn Helms Lorick, husband, David of Blythewood; son, David W. Helms, wife, Christy of Ballentine; sister, Marcene Helms Adams of Lancaster. He is also survived by granddaughter, Kaitlyn Walsh, husband, Brian of Murfreesboro, TN, grandsons Michael Lorick, Devin L. and Garrison D. Helms; great-grandchild, Harding Walsh; and his loving dog, Hannah. Those who preceded him in death, besides his parents are an infant daughter, Danielle and brothers, Alton and Milton Helms. The family would like to offer a special thanks to Regency Hospice for their wonderful care. A special thank you to Pam Speaks and Teresa Sturkie for their compassion. Deep appreciation is also expressed for Ken and Kathleen Davis for all of the time they spent with Danny. They were truly a blessing and Danny looked forward to his visits with them. In lieu of flowers, memorials may be made to Riverland Hills Baptist Church, 201 Lake Murray Blvd., Irmo, SC 29063 and/or The Oliver Gospel Mission, 110 Taylor Street, Columbia, SC 29201 and/or Alzheimer’s Assn., 140 Stoneridge Drive, #210, Columbia, SC 29210

The family of Danny M. Helms created this Life Tributes page to make it easy to share your memories.