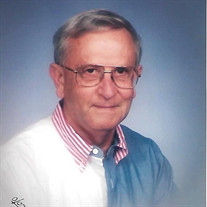 It is with deep sadness to report that Dr. David Byrd, 90, passed away on March 28 in his home. David was born in Marion, SC to Henry and Lucy Byrd and was the youngest of six children. After graduating from Wofford College, David taught high school for three years before joining the US Army where he was stationed at Fort Lewis, Washington. He returned to South Carolina to further his education at the University of South Carolina (USC) where he earned a Master’s degree and Doctor of Philosophy (Ph.D.) in English. He began his career teaching English at USC where he was able to bestow his vast knowledge of literature to his students and where he published books on such vast topics ranging from Shakespeare to books on effectively writing for business and government. David was awarded the honor of Teacher of the Year in 1980. After twenty-six years, David ended his teaching career as Professor Emeritus of English. While at Wofford, David was chosen for the Glee Club and joined The Stratford Players, a group of students who shared an interest in the study of drama and the production of plays. His avid support of the arts would continue throughout his life. David held a Life Membership to The National Film Society; he was a founding member of Workshop Theatre of South Carolina. Also, it would be remiss to not mention his passion for the opera. David was a Patron level member of The Metropolitan Opera for many years. David enjoyed many activities during his life. At Wofford, he was a member of Pi Kappa Phi and the business Journal. A devoted Gamecock football fan and season ticket holder, he rarely missed a game. He enjoyed the beach as much as he enjoyed the mountains. He enjoyed socializing with friends which often included playing cards or traveling. David enjoyed traveling almost as much as reading books. He traveled domestically and internationally. One such trip was a trip to Paris with his husband and friends to bring in the Millennium. To relax he could often be found in the yard where he was quite the gardener. Finally, David’s well-known guilty pleasure was collecting Santa Claus figurines. David Byrd was a man of integrity. He always stayed true and never forgot his humble roots. If he called you a friend, you never had to doubt it. You could always count on his benevolent smile, and he was always unselfish with his time. His generosity was only matched by his diligent listening skills. David was predeceased by his parents and was the last surviving sibling. His siblings included: Louise Sullivan, Elizabeth Turner, Margaret Ammons, Marvin Byrd, and Edward Byrd. Also, he was predeceased by his partner of 30 years, Crawford Kimbrell. Surviving to mourn his loss are multiple nieces and nephews, and his husband of 28 years, Todd Waters, and their two cats, Tumbles and Bella. A celebration of Life service will be held on Friday, April 22, 2022, at 1:30 p.m. in the Chapel of Temples Halloran Funeral Home. The family will greet friends from 12:30 p.m.-to 1:30 p.m. prior to the service.

It is with deep sadness to report that Dr. David Byrd, 90, passed away on March 28 in his home. David was born in Marion, SC to Henry and Lucy Byrd and was the youngest of six children. After graduating from Wofford College, David taught high... View Obituary & Service Information

The family of David Gatlin Byrd created this Life Tributes page to make it easy to share your memories.

It is with deep sadness to report that Dr. David Byrd, 90, passed...