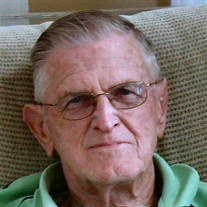 David H. Smoak, 89, of Columbia, went to his eternal home on March 17, 2018. The funeral service for Mr. Smoak will be held on Tuesday, March 27, 2018, at St. Andrews Baptist Church, 230 Bush River Road, Columbia, S.C. beginning at 11:00 a.m. Reverend Ronald “Dee” Vaughan and Reverend M. Fred DeFoor, Jr. will officiate. The family will receive friends at 10:00 a.m. in the Atrium of the church. A private family inurnment will be held at Bush River Memorial Gardens, 5400 Bush River Road, Columbia. Mr. Smoak was born on January 1, 1929 in Denmark, S.C. and was son to the late David Duncan Smoak and Aileen Hightower Smoak. He was married to the love of his life Mary McMillan Smoak for 62 years whom preceded him in death. He was a gentle giant who lived his Christian faith by being a wonderful husband, father, grand and great grandfather and loving friend. He began his career in 1947 at SCE&G as a lineman and remained there for 44 years ending his career in 1991 as Superintendent of the Transmission. In 1954 Mr. Smoak served in the Signal Corps in the US Army during the Korean conflict. David was a longtime and dedicated member of St. Andrews Baptist Church. He was a Charter Member of Tanglefoots Square Dance Club. After retiring he remained busy by volunteering at Habitat For Humanity, Harvest Hope Food Bank and Camp Kemo. Surviving are daughters, Marybeth S. Crews (William) of The Woodlands, Texas; Tina S. Clark (Tom) of Columbia; a son, Michael Smoak (Tammy) of Irmo, S.C.; a brother, Gene Smoak (Susan) of Alpharetta, G.A.; grandchildren, Dana Drachenberg (Steven), Jamison Crews, Austin Smoak, and Kara Smoak; great grandchildren, Addison Crews and Andie Joy Drachenberg and his loving and devoted companion of nine years, Linda Epting. He is also survived by many other family members that loved him dearly. Memorials in Mr. David H. Smoak’s honor should be made to St. Andrews Baptist Church, 230 Bush River Road, Columbia, S.C. 29210. Temples Halloran Funeral Home is in charge of arrangements.

The family of David H. Smoak created this Life Tributes page to make it easy to share your memories.