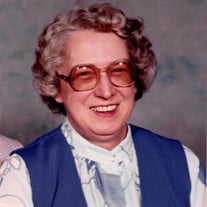 COLUMBIA—The funeral service for Dorothy Louise Bush, 91, of Columbia, will be held at 3 p.m., Monday, June 3, 2019, in the chapel of Temples Halloran Funeral Home, 5400 Bush River Road, Columbia, SC 29212, with Chaplain David Denning officiating. A visitation will be held from 2 p.m. until the hour of service for family and friends. Mrs. Bush will be laid to rest at a later date in Pleasant Hill Cemetery in Allegheny, PA. Clawson Funeral Home, 170 Main Street, Leechburg, PA 15656 will handle those arrangements. Dorothy was born in Allegheny, PA on April 4, 1928, and passed away on May 28, 2019, in Lexington, SC. She was the daughter of the late John D. Zimmerman and Hazel Kerr Zimmerman. Dorothy had worked for J.C. Penney’s over 22 years in both Erie, PA as well as Atlanta, GA in the position as an Invoice Specialist. She was a graduate of Freeport High School and a 1949 graduate of Grace Martin Business School in Pittsburgh, PA. Mrs. Bush was also a former member of The Evangelical Lutheran Church of the Epiphany while residing in Winston-Salem, NC. Survivors include son, Richard M. Bush (Kathleen) of Columbia, 7 grandchildren and 8 great-grandchildren; sister, Margaret Martin; son-in-law, David Billing. Those who preceded her in death include, her late husband, Harold M. Bush; daughter, Patricia Ann Billing; brother, John J. Zimmerman; sisters, Helen Beecher and Martha Quale; grandson, James R. Bush.

The family of Dorothy Louise Bush created this Life Tributes page to make it easy to share your memories.