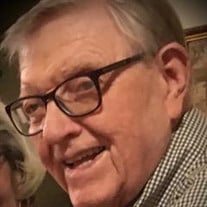 A private memorial for Dr. Edward Richard Williams will be held on Tuesday, February 23, 2021. Pastor Vic Jaeger will ofﬁciate. A celebration of life will be scheduled in his honor at a later date. Dr. Williams was born on November 10, 1932, in Sublet, Wyoming, and passed away on February 7, 2021, at Lexington Medical Center. Edward was the son of the late Edward Murray Williams and Agnes Bertha Chipp Williams. He proudly served his country in a MASH unit with the United States Army during the Korean War. Upon discharge, he returned to the University of Nebraska, becoming a Registered Pharmacist. He was then honored with a scholarship to the University of North Carolina at Chapel Hill and earned a Doctorate in Public Health. He and his family then moved to Columbia, where he directed the Analytical Laboratories at DHEC for 20 years. Dr. Williams was a member of Columbia First Seventh-day Adventist Church. He was a devoted husband to Donna, his wife of 64 years, and a loving father to their daughter, Joni Williams Sealy (Gene) of Columbia, SC, and son, Dr. Todd E. Williams (Mary) of Charleston, SC. His grandchildren are Jillian Sealy Baker (Cameron) and Ethan Michael Sealy (Ahila). His younger brother, Harry, and his parents preceded him in death. Ed and Donna loved traveling and enjoyed retirement with numerous adventures. He enjoyed blue ridge camping (especially during the rainy season) and ﬂy ﬁshing. He enjoyed carpentry, beekeeping, and was an avid woodworker and gardener. He will be greatly missed. Memorials may be directed to a charity of your choice.

A private memorial for Dr. Edward Richard Williams will be held on Tuesday, February 23, 2021. Pastor Vic Jaeger will of&#64257;ciate. A celebration of life will be scheduled in his honor at a later date. Dr. Williams was born on November 10,... View Obituary & Service Information

The family of Dr. Edward R. Williams created this Life Tributes page to make it easy to share your memories.

A private memorial for Dr. Edward Richard Williams will be held...