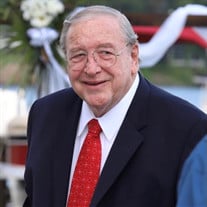 Jack Franklin Wolfe, Jr. passed away on Monday, December 13, 2021, surrounded by his loving family. A service celebrating his life will be held on Friday, December 17, 2021, at Riverland Hills Baptist Church, 201 Lake Murray Blvd., Irmo, SC 29063, at 1:00 p.m. A graveside burial service will follow in Bush River Memorial Gardens, 5400 Bush River Road, Columbia, SC 29212. The family will receive friends on Thursday, December 16, 2021, from 5:00-7:00 p.m., also at Riverland Hills Baptist Church. Jack was born in Chesnee, South Carolina on December 14, 1943. He graduated from Chesnee High School in Chesnee, SC, and then attended Clemson University. Jack had a long and accomplished career working on behalf of electric cooperatives in South Carolina. He spent most of his career with Mid-Carolina Electric Cooperative, Inc. in Lexington, SC, where he served as the President and CEO for thirty-seven years and retired in 2013. During that time, he also served as a Board of Trustee Member of The Electric Cooperatives of South Carolina, Central Electric Power Cooperative, Inc., and the Cooperative Finance Cooperation. Jack served as a Board Member of the National Rural Electric Cooperative Association (NRECA) from 1999 to 2010 and had the honor of serving as President from 2007-08. Jack received the highest honor conferred by the NRECA, the Clyde T. Ellis Award, for his service to electric cooperatives across the country. He later served as a Board Member of Santee Cooper. Despite his many accomplishments, Jack always put his family first. He is survived by his wife of fifty-seven years, Cheryl Holloman Wolfe; sons, Jack “Trey” Franklin Wolfe, III (wife, Jodi Thoennes Wolfe) and William “Bill” Edward Wolfe, Sr. (wife, Loribeth Lee Wolfe); grandchildren, William “Jay” Edward Wolfe, Jr., John Ellett Wolfe, Sara Elizabeth Wolfe, and Jack Franklin Wolfe, IV; and great-grandchildren, Hollingsworth Lee Wolfe and William Edward Wolfe, III. He is predeceased by his parents, Jack Franklin Wolfe, Sr. and Virginia Champion Wolfe, and his daughter-in-law, Lee Ellett Wolfe. Jack was also devoted to his church and community. He served as a Deacon at Riverland Hills Baptist Church and served on many committees with the desire to bring others to Christ. He coached many ball teams and led many other initiatives in the local community. Memorials may be made to Epworth Children’s Home, P.O. Box 50466, Columbia, SC 29250 or The Michael J. Fox Foundation for Parkinson’s Research, P.O. Box 5014, Hagerstown, MD 21741.

The family of Jack Franklin Wolfe, Jr. created this Life Tributes page to make it easy to share your memories.