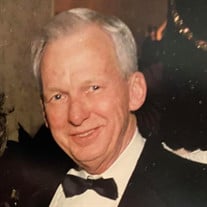 On September 13, 2021, our lives became a little less bright. Dr. James Allen Smith, III passed away peacefully at home surrounded by family. A celebration of life will be held at First Baptist Church of Columbia, Friday, September 17th at 3 pm in Boyce Chapel. The family will receive friends and family beginning at 1:30 pm in Boyce Chapel and a private family burial will follow. Born on November 19, 1934, Dr. Smith was born in Macon, Georgia to Dr. James A. Smith II and Sara Jennings Hall, and grew up with his younger brother Hampton Jennings Smith. Here he met and married the love of his life, Carey Louise Stevens, who predeceased him in 2001. He was a graduate of Davidson College (1956) and Emory School of Medicine (1960). Following medical school, he began his Air Force service at the Air Force Academy in Colorado, serving from 1959-1964 before deciding to return to the University of Missouri for his residency and subsequent Fellowship in Urology. He joined a private Urology practice in Roanoke, Virginia, and joined the Air Force Reserve. In pursuit of a change, he became the Medical Director of AT&T and worked on-site at the AT&T plant in Gaston, SC in 1981. Dr. Smith continued to work as Medical Director in both Columbus, Ohio (AT&T), and again in Chicago, IL (Ford Motor Co.) until his retirement. As an Air Force reservist, Dr. Smith was deployed during Desert Shield and continued his service until he retired in 1995 as a Lt Colonel. A devout Christian and longtime church member of First Baptist Church of Columbia, Dr. Smith’s faith was an integral part of his life. He served in numerous volunteer positions at First Baptist Church in Roanoke, Virginia as well as FBC Columbia. He was a lifelong member of the Rotary Club and enjoyed volunteering at Lexington Medical Center. He loved the beach, traveling, and many outdoor activities. His best times were spent with his children and grandchildren. Dr. Smith leaves to cherish his memory to his daughters, Elizabeth (Lisa) Burgin (Stuart) from Columbia, SC, Carey Stevens Monts (Tripp) from Vienna, VA, and his son, Steven Allen Smith (Lisa) from Lexington, SC. He leaves behind his adored grandchildren – Taylor, Caroline & Will Burgin, Haley, and Zachary Monts as well as a host of relatives and friends. Dr. Smith will be remembered for his generous spirit through his support of multiple charities and his sharp wit. He was a loving and devoted father, husband, and “Poppy” who deeply cared for his family. Dr. Smith personified a life well lived – putting his faith and trust in God above all. His spirit will remain alive in the hearts and memories of everyone who knew and loved him. He enjoyed life to the fullest and leaves behind a loving family, countless friends, and a legacy of professional achievements and good works. We would like to thank Right at Home in West Columbia and Abbey Road Hospice for the amazing care they provided. To his outstanding caregivers, Vicki, Jacqueline, Tina, and Dawn: we are forever grateful for you all loving and caring for him like he was family. In lieu of flowers, contributions may be made to either of the following: Davidson College, where Dr. Smith received his undergraduate degree and was a proud WILDCAT alumnus. (Box 7170 Davidson, NC 28035) The Methodist Home for Children & Youth, where Dr. Smith’s grandfather was a treasured member of the staff and has a building named in his honor. (304 Pierce Ave, PO Box 2525, Macon GA, 31204)

On September 13, 2021, our lives became a little less bright. Dr. James Allen Smith, III passed away peacefully at home surrounded by family. A celebration of life will be held at First Baptist Church of Columbia, Friday, September 17th at... View Obituary & Service Information

The family of Dr. James Allen Smith III created this Life Tributes page to make it easy to share your memories.