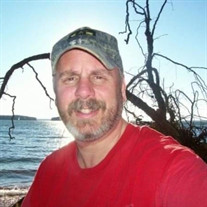 A memorial service for Jeffrey Todd Robinson, 56, of Leesville, will be held on Saturday, April 16, 2022, at 3:00 p.m. in the Irmo Church of God, 10215 Broad River Road, Irmo, SC 29063. Bishop Randy Caulder will officiate. Todd was born November 4, 1965, in Muechweiler, Germany, and departed this early life on April 9, 2022, at his residence surrounded by his loving family. Todd was the son of the late Wylie Franklin Robinson and Martha Caroline Mclane Robinson. Todd was a graduate of Irmo High School, where he played the drums in the marching band. His musical talent also had him playing in the "Namesake" Band. He was a member of the Irmo Church of God, where he also played the drums. He worked in the Boy Scouts and children's ministry. Todd had worked in retail sales for several Columbia and Atlanta area jewelry stores and the Terminix Corp. His many hobbies included camping, fishing, archery, and golf. and making his YouTube videos. Survivors include his loving wife of 33 years, Laura L. Robinson, daughter, Taylor Gilseth (Kyle); son, Derek Cody Robinson (Hannah); grandchildren, Christopher Todd Robinson, Abbey Jude Robinson, and Sawyer Joseph Gilseth. Those who preceded him in death were his parents and his brother, Wayne Franklin Robinson.

The family of Jeffrey Todd Robinson created this Life Tributes page to make it easy to share your memories.

A memorial service for Jeffrey Todd Robinson, 56, of Leesville,...