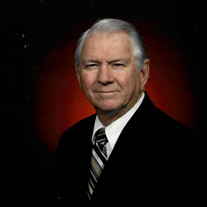 John Brewer Reeves of Columbia, South Carolina, died August 19, 2021, at the age of 84. Born in Heath Springs, South Carolina, on June 29, 1937, he was the second of six children of the late Stanley Boyd Reeves and Edna Barrett Reeves. He was married to Virginia Freeman Reeves, deceased, for 36 years, and raised two daughters. He graduated from Heath Springs High School in 1954 at the age of 16, where he played football and played a State Championship in 1953, basketball and baseball. He also played two seasons of American Legion baseball for the Lancaster Legion team during the summers of 1952 and 1953. He served his country by enlisting in the U.S. Navy in July 1954 serving abroad on the USS Diachenko APD 123, the aircraft carrier USS Franklin D. Roosevelt CVA 42, and at the Armed Forces Staff College in Norfolk, Virginia. In May 1955, the USS Diachenko was ordered to go 18 miles up the Cao Cam River to Hiaphong, which was the seaport for Hanoi, French Indochina, to rescue Dr. Tom Dooley, III, and his crew of four Navy men. Dr. Dooley was a Navy doctor on a Mercy Mission in French Indochina which would become known as North Vietnam and South Vietnam three days after the rescue. The Diachenko also served as the Flagship for the evacuation unit Commander during the Passage to Freedom Operation which carried refugees out of French Indochina to South Vietnam. While in the Navy, he pitched fastpitch softball for the enlisted men’s team and took the team to the Championship in the spring of 1958. His four-year enlistment ended June 27, 1958. In 1960, he graduated from Columbia Commercial College majoring in Accounting, and served as Student Body President his last year. After graduation, he was employed by Roadbuilders, Inc., Oliver Motor Company, and he was the accountant, office manager, Secretary-Treasurer, and served on the Board of Directors for Southern Lubricants, Inc., from where he retired in 2004. Over the years, he enjoyed hunting and fishing with his lifelong friend Keith, as well as playing tennis, bowling, golf, drag racing, and his very fast 1958 Plymouth. It is important to note that he won 17 out of 17 drag races at five different drag strips in 1960. He always wanted to shoot as well as Grandfather Reeves and he probably did that as his best day hunting quail occurred on December 1, 1973, where he had 14 of 22, and his last day hunting doves occurred on September 22, 1979 where he had 12 of 13 all with his great Browning A5 20 gauge shotgun. He was very proud to be Virginia’s husband and of the time he spent with his two daughters teaching them many things to include fast-pitch softball and tennis. He was an active member of St. Andrews Baptist Church since March, 1975, where he served on numerous committees over the years. He was a Christian and loved the Lord all of his life. During his life, he received great joy by demonstrating this love and gave to others and especially loved making people laugh, many times complete strangers, with his sense of humor and funny life’s stories. He was always looking for an opportunity to share God’s love even during the last days of his life. He is predeceased by his parents, his brother Stanley Jackson “Jack” Reeves and his loving wife, Virginia. He is survived by daughters, Wendy Reeves Byars (Richard) and Laura Suzanne Reeves and his dear friend, Hilda Hall, who was his faithful companion for nearly 20 years. Also surviving are sisters Sylvia Reeves Cartin (Courtney Cartin, deceased), Linda Reeves Brinson (David), his brother, Coach Gerald Reeves (Jean), sister-in-law Wilma Reeves Phillips (Frank), and many nieces, nephews, great-nieces and great-nephews who he loved laughing with and is already sorely missed by many. The family will greet friends in the vestibule of St. Andrews Baptist Church on August 23, 2021, at 1:00 pm with a service to follow at 2:00 pm. Burial will follow immediately after the service at Bush River Memorial Gardens. In lieu of flowers, memorials may be made to St. Andrews Baptist Church, 230 Bush River Road, Columbia, S.C. 29210-7393.

John Brewer Reeves of Columbia, South Carolina, died August 19, 2021, at the age of 84. Born in Heath Springs, South Carolina, on June 29, 1937, he was the second of six children of the late Stanley Boyd Reeves and Edna Barrett Reeves. He... View Obituary & Service Information

The family of John Brewer Reeves created this Life Tributes page to make it easy to share your memories.