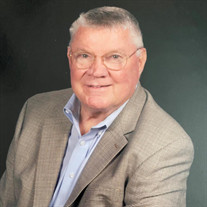 John Hopkins Saunders, Sr. of Chapin quietly slipped away on January 11, 2021, at the age of 84. He is now in the company of his Lord and Savior Jesus Christ. The world has lost a devoted husband, father, grandfather, uncle, cousin, friend, and businessman. Gamecock Nation has lost its biggest fan and a lifetime loyal supporter. He was preceded in death by his parents, John Elvin Saunders and Lydia Veal George Saunders, eleven of his brothers and sisters, and his first wife, Anna Saunders Brundage. John is survived by his loving and devoted wife of over 36 years, Julie Clore Saunders, his loving children, Deborah Saunders Tuttle (James), John Hopkins Saunders, Jr. (Amy), Anissa Saunders Leahy (Tom), Stephen Harley Smith, Jr. (Holly), and Lindsey Smith Batavia (Neil), his adoring grandchildren, Jamie Tuttle, Drew Tuttle, Shelby Saunders, John Hopkins Saunders, III, Amelia Leahy, Caroline Leahy, Tripp Smith, Cooper Smith, Hayden Smith, Lela Batavia, and Maggie Batavia, a sister, Pat Saunders Walker, as well as numerous nieces, nephews, and cousins. He also leaves behind his sweet dog, Abby. Born on June 21, 1936, in Walnut Point, Virginia, John was the twelfth of thirteen children. Although he never shied away from the hard work and dedication it took to run the family farm, John knew there was something more he wanted to accomplish in his life. At Churchland High School, he became an All-Conference, All-State football standout which gained him attention from many colleges and universities across the country. After graduating high school in 1956, John found himself enrolled in summer school at the University of South Carolina (after some clever maneuvering by the Gamecocks coaching staff but to the dismay of the University of North Carolina). He continued at the University of South Carolina that fall and played for his beloved Gamecocks from 1957-1960 under coach Warren Giese. Considered one of the top fullbacks in school history, he won many awards and honors during his time with the Gamecocks. In 1958, he won the ACC Blocking Trophy, the Jacob’s Blocking Trophy, led the ACC in rushing, and was named to the All-ACC football team. Selected as team co-captain along with Ed Pitts in 1959, he was also selected to play in the North-South Shrine Game. John graduated from the University of South Carolina in 1960 with a degree in Business Administration. In 2010, John was inducted into the University of South Carolina Athletic Hall of Fame for his achievements. Forever To Thee #33, he went on to play professionally in the Canadian Football League before a re-injured shoulder ended his career. After football, John began his professional career with BF Goodrich as part of their executive development program. He served in many roles there over the next several years, including time spent in the Charlotte area. Driven by a desire to raise his family in the Columbia area, he joined Palmetto Wholesale Company and for the next 30 years, he was VP of Sales and eventually President and CEO. Throughout his career, he served in numerous industry leadership roles and was a highly respected business innovator in the hardware and building materials industry. His passion throughout his career was to be an effective leader, and he worked tirelessly to put others in positions to thrive and succeed. John also faithfully served his community and always tried to give back to those in need. John had many hobbies throughout his life. He was an avid sportsman and his grandchildren will fondly remember his duck calls. He was also an expert woodworker who handcrafted many beautiful pieces of furniture that will be cherished keepsakes for years to come. John was an instrument-rated pilot who enjoyed flying whenever he was able. Another of John’s passions were his animals. He loved and cared for a plethora of pets over the years (including dogs, cats, goats, pigs, horses, and even gamecocks) who brought him great joy. John was a longtime member of Chapin United Methodist Church. Most recently, he was a member of the Black Sheep Sunday School Class, the United Methodist Men, the Thursday Morning Men’s Bible Study and Prayer Group, a member of the Church Council, along with holding other various leadership positions over the years. His church and his Faith were of the utmost importance to him. John was blessed with a number of friends and wonderful relationships throughout his lifetime, many of whom have preceded him in death. He shared a unique and close friendship with Robert Patterson over many years. He was also a dedicated member of the Peak Coffee Club where many of the world’s problems were surely solved. Near the end of his life, he made a multitude of friends who loved and cared for him at Wellmore of Lexington, including Dr. Stan McCloy and the entire staff of All Seasons Hospice. The love, care, and support they provided will always be appreciated. John’s family would also like to thank Dr. Carroll Pinner, Dr. William Brabham, Dr. Stan Juk, and their respective staffs for their devotion and years of care for John. A private Celebration of Life will be held at 11:00 am on Saturday, January 16, 2021, at Chapin United Methodist Church for the immediate family only. The Reverends Jody Flowers and Albert Cox and Pastor Paul Allen will officiate. The family invites you to view the service by livestream at https://www.facebook.com/TemplesHalloranFuneralHome/ In lieu of flowers, memorials can be made to some of John’s favorite charitable organizations: Chapin United Methodist Church 415 Lexington Ave. Chapin, SC 29036 Oliver Gospel Mission 1100 Taylor St. Columbia, SC 29201 Pawmetto Lifeline 1275 Bower Parkway Columbia, SC 29212 I have fought the good fight, I have finished the race, I have kept the faith. (2 Timothy 4:7)

John Hopkins Saunders, Sr. of Chapin quietly slipped away on January 11, 2021, at the age of 84. He is now in the company of his Lord and Savior Jesus Christ. The world has lost a devoted husband, father, grandfather, uncle, cousin, friend,... View Obituary & Service Information

The family of John Hopkins Saunders, Sr. created this Life Tributes page to make it easy to share your memories.

John Hopkins Saunders, Sr. of Chapin quietly slipped away on...