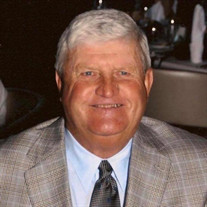 Leonard Dean Davis, 79, of Prosperity, passed away on Friday, January 22, 2021, at Dorn VA Medical Center in Columbia. Mr. Davis was born in Columbia, S.C. on September 17, 1941, to parents Daniel Bruce Davis and Saluda Bell Starnes Davis. Dean served in the U.S. Army and was a combat veteran during the Vietnam War. Dean and his wife Sondra Whitaker Davis made their home in Prosperity where he worked as a construction inspector at Fort Jackson. Mr. Davis was a friend to all and rarely met a stranger. He enjoyed playing golf at Mid Carolina Golf Club and was a member of the Acacia Masonic Lodge #94. An avid sportsman, Dean also loved to hunt and fish. Dean was a member of Earlewood Baptist Church in Columbia. Above all else, Dean loved his entire family. Those left to mourn his loss but celebrate his life include his wife, Sondra Whitaker Davis; daughter, Deana Lovette (Keith); granddaughters, Alexis and Claire Lovette; and sister, Carolyn Rebecca Florence. A daughter, Angee Gause (Dale); granddaughters, Meda and Mariah Gause. Mr. Davis was predeceased by his parents; a daughter, Dee Anne Davis; and brothers, Larry, Olin, and Dickie Davis. The family would like to thank the Warrior’s Walk staff as well as the staff at the Dorn VA Medical Center 2 West, for their service and care during Dean’s illness. A special thanks to Marshall H. Fulton, Staff and Charge RN of 2 West for the comfort and peace that he gave Dean. Services for Leonard Dean Davis will be held on Friday, January 29, 2021, at 2 p.m. at Bush River Memorial Gardens, 5400 Bush River Road, Columbia, S.C. 29212 with a visitation one hour before the service. Friends and family may call between 11 a.m. and 1 p.m. Friday for an open casket viewing prior to the visitation at Temples Halloran Funeral Home. In lieu of flowers, memorials may be made to Warrior’s Walk Hospice Care, 6439 Garners Ferry Road Columbia, SC 29209

The family of Leonard Dean Davis created this Life Tributes page to make it easy to share your memories.

Leonard Dean Davis, 79, of Prosperity, passed away on Friday,...