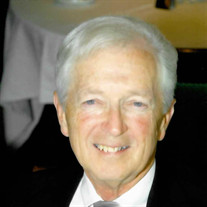 Leslie Ray “Les” Carter passed away on May 11th, 2022, at the age of 80, at his home in Irmo, South Carolina. The funeral service will be held at the First Baptist Church of Irmo on Saturday, May 14th, at 1:30 p.m. The Rev. Dr. C. Clark McCrary and Rev. Blair M. Smith will officiate. For all who knew and loved Les, a visitation with a catered lunch hosted by the family will be held in the Family Life Center of First Baptist Church of Irmo prior to the service, from 11:30 a.m. to 1:00 p.m. The church is located at 7068 Nursery Road, Columbia, SC, 29212. Burial will be held at Fort Jackson National Cemetery on Tuesday, May 17th, 2022 at 11:00 a.m. Les was born on May 23rd, 1941 in Dallas, Texas, to the late Giles and Inez Carter and was the brother of Jeanne Carter. After a year at the University of Texas, he served in the Army, the National Guard, and Reserves. He then completed his education at Southern Methodist University, where he met and married Judy Williams of Abilene, Texas. They met at a church skating party and were married for 60 years. Les began his career in insurance and then started Carter Financial Services, Inc., which he ran for over 30 years. Les enjoyed singing with the Palmetto Mastersingers and the church choir, but he particularly enjoyed singing duets with his wife. He also enjoyed golf, traveling, playing the trumpet (including in the Army band,) and games with friends. Les was known for his wonderful sense of humor, his generosity, and his love for family and friends. He was a faithful servant of Jesus and an active member of the First Baptist Church of Irmo, SC. Besides his parents, he was preceded in death by his sibling, Patsy Carter. Mr. Carter is survived by his wife, Judy; son, Troy; daughter-in-law, Heather; his grandchildren: Benjamin Carter and his wife, Julie, William Carter, and Gabriel Carter; his sister, Jeanne Carter; and his adopted daughter, Amy Wolfe. The family would like to thank all their friends and Amedisys Hospice for their loving care for the last days of his life. In lieu of flowers, memorials may be made to the First Baptist Church of Irmo, 7608 Nursery Road, Columbia, SC, 29212.

The family of Leslie "Les" Ray Carter created this Life Tributes page to make it easy to share your memories.