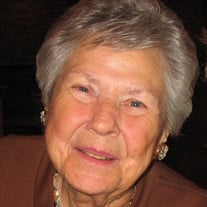 Columbia – The funeral service for Mabel Rivers Smith, 89, of Columbia, will be held on Tuesday, October 1, 2019 at 12 noon at Grace United Methodist Church, 410 Harbison Blvd., Columbia, SC 29212. The Reverend Rett Haselden will officiate. Her family will receive friends from 11:00 a.m.-12 noon at the church Fellowship Hall. Burial will be on Wednesday, October 2, 2019 at 1 p.m. in Beaufort National Cemetery. Mabel was born on December 28, 1929 in Hampton County, SC and passed away on Saturday, September 28, 2019 with her loving family at her side. She was the daughter of the late Peter Henry Rivers and Daisie Belle Bowers Rivers. Mabel was a proud graduate of Newberry College and taught as an elementary school teacher for over 42 years. Her love for children was expressed by the joy she found in teaching. Mabel was dedicated to her students and delighted in their learning and development. She was a longtime member of the Port Royal UMC and later attended Grace UMC in Columbia. Her pastimes included gardening, reading, cooking, and hosting her family and friends for dinners. Mabel loved her son and daughter and was always a mainstay in their lives. They loved her deeply in return and will miss her always. She was deeply devoted to her grandchildren as well and enjoyed watching them grow into the wonderful young men they are today. Surviving are her daughter, Marcia S. Adams (Bob) of Irmo; son, Henry O’Brien (Crystina) of Smithfield, VA; sister, Adeline Green of West Columbia; grandsons, Alex Adams of Columbia and Nicholas Adams of Greenville, along with several nieces and nephews. She was preceded in death by her beloved late husband, Marcellus (Bill) Smith; brothers, Peter, Jacob, Roscoe and Kenneth Rivers. The family would like to thank the staff of All Seasons Healthcare Hospice for the loving care they gave to Mabel at the end of her life. The family would also like to thank Mabel’s special caregivers Chastity Jennings, Shalonda Foster, and Ann Watson as well as her loving case manager, Gale Bostick. In lieu of flowers, memorials may be made to the Alzheimer’s Association.

The family of Mabel Rivers Smith created this Life Tributes page to make it easy to share your memories.

Columbia – The funeral service for Mabel Rivers Smith, 89, of...