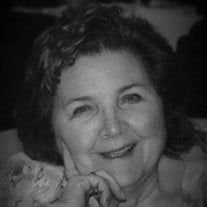 The memorial service for Margaret Ellen Putnam, 87, of Irmo will be held on Thursday, July 22, 2021 at 10:00 am at Woodland Hills Community Church located at 2626 Ashland Rd. Columbia, S.C. 29210.Reverend Paul Cochrane will officiate. A burial will occur in her treasured home state of Washington on Friday, July 30, 2021 at 1:00pm at Evergreen Washelli located at 11111 Aurora Ave N, Seattle, WA 98133. Margaret Ellen Putnam, 87, of Irmo, South Carolina died Wednesday July14, 2021. She was born December 6, 1933 in Seattle, Washington, the daughter of the late Richard Harwood Johnson and Peggy Divine Johnson. As an only child, she was loved and adored by her parents. She grew up in Seattle and was a 1952 graduate of Queen Anne High School. During high school she worked for the ski patrol at Snoqualmie Pass. She met the love of her life, Robert Putnam, at the age of 18 and they were married for 66 years. Throughout her life she lived in several different places including Alaska, Asheville, N.C., and the Columbia, S.C. area; but the place she loved most of all was Washington State. Margaret worked in retail sales and security, she was also an elevator operator at the Exchange Building in Seattle and at the Space Needle when it opened during the Seattle World’s Fair, but she spent most of her career as a bus driver. She drove a school bus for 26 years for the Kent School District. Many of her treasured memories were with her bus driver friends, the students and their families as she got to know them over the years. Margaret loved the Lord and faithfully served in many ways. She volunteered at Lakeside Bible Camp, served as a counselor during the Billy Graham Crusades, taught Sunday school, and enjoyed her work at Child Evangelism Fellowship. She and Bob attended Des Moines Gospel Chapel for over 25 years. After they moved to South Carolina in 1999, they were embraced by Woodland Hills Community Church and Bethany Chapel. Margaret cherished her dear friends but nothing made her more proud than her family, especially her grandkids and great-grandkids. Margaret will be remembered as a loving wife, great mother, and the best grandma and Gigi. She is survived by her husband of 66 years, Robert Putnam; sons John M. Putnam (Victoria) of Clearwater, FL, Mark R. Putnam(Lola) of Clearwater, FL, and David M. Putnam of Spring Hill, FL; grandchildren Jennifer Fisher (Robert), Matthew Putnam (Jenn); great-grandchildren Emma Fisher, Benjamin Fisher, and Stella Putnam. In lieu of flowers, the family of Margaret Putnam, requests that memorials be made to their local Child Evangelism Fellowship (CEF) chapter in her honor.

The memorial service for Margaret Ellen Putnam, 87, of Irmo will be held on Thursday, July 22, 2021 at 10:00 am at Woodland Hills Community Church located at 2626 Ashland Rd. Columbia, S.C. 29210.Reverend Paul Cochrane will officiate. A burial... View Obituary & Service Information

The family of Margaret E. Putnam created this Life Tributes page to make it easy to share your memories.

The memorial service for Margaret Ellen Putnam, 87, of Irmo will...