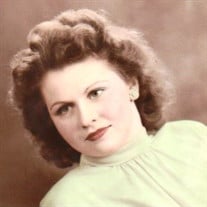 IRMO—A Mass of Christian Burial for Mary C. “Connie” Thayer, will be held at Our Lady of the Hills Catholic Church, 120 Marydale Lane, Columbia, SC 29210 on Monday, September 23, 2019, at 10:30 a.m. The Rosary will be recited at 9:00 a.m. with a visitation to follow at the church. Interment will follow at Bush River Memorial Gardens, 5400 Bush River Road, Columbia, SC 29212. Temples Halloran Funeral Home is assisting the family. Connie was born in Philadelphia, PA on October 23, 1925, to the late Joseph Conroy and Susan Daly Conroy. She passed away on September 16, 2019, at her home surrounded by her family. Mrs. Thayer along with her late husband, Russell King Thayer, Jr. were founding members of Our Lady of the Hills Catholic Church. Connie graduated from Haverford High School in PA in 1944. During WW II she worked in a defense factory making munitions. In February 1946, she met the love of her life Russ at the Crystal Ball Room in Philadelphia. They were engaged in May and married in October 1946. Russ and Connie danced to the Glenn Miller band and other 40s bands from the day they met and throughout their lives. Connie’s happiness was witnessed in her love of God, family, church, friends, and community. She applied her meticulous bookkeeping skills to her successful careers in banking, the travel industry, and the Rose Tree Media School District. Although she had an accomplished career, her volunteer work was most rewarding. Topping the list was her service as Co-Chair of the Our Lady of the Hills Bereavement Committee and as a counter. She also served on the Bordendale Volunteer Fire Department Ladies Auxiliary in Media PA; and at the Town of Irmo. Surviving are her daughters, Susan Reinhart (Peter) of Charlotte, NC and Terri Saxon (Lamar) of Columbia, SC; son, Russell King Thayer III (Scarlett) of Clemson, SC; grandchildren Adam Saxon, Joey, Buster and Ann Nimmer; eight great-grandchildren; and numerous nieces and nephews and grand nieces and nephews. Connie was predeceased by her siblings Joey, Johnny, Reds, Betty, Eileen, and Billy. The family would like to extend its sincere appreciation to Linda Ahlars and MSA Hospice team of June, Aretha and Charletta for their loving care of our mother during her final health challenges. In lieu of flowers, donations can be made to Our Lady of the Hills Catholic Church or a charity of ones’ choice.

The family of Mary Connie Thayer created this Life Tributes page to make it easy to share your memories.