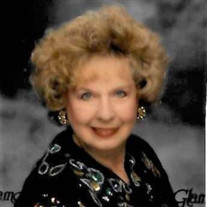 A memorial service for Nora M. Rice, of Columbia, will be held at 1:00 p.m., Monday, March 22, 2021 at Virginia Wingard Memorial United Methodist Church, 1500 Broad River Road, Columbia, SC 29210. The family will receive friends from 11:30 a.m. to 12:45 p.m. prior to the memorial service in the Activity Center of the church. Nora was born on January 17, 1919 to the late Alvin Roland Moore and Lucy Vandermullen Moore of Norfolk, VA. She was a 1935 graduate of Maury High School in Norfolk, VA and attended William and Mary VPI College at Norfolk for the 2 yrs. That were offered at that time. Shortly there after she went to work at Ft. Monroe for the government during World War II, she later worked as a school secretary until she retired from Seminole Elementary School in 1985. Nora was a long-time member of Virginia Wingard Memorial UMC and the Christian Love Sunday School Class. Nora was predeceased by her late husband, Robert “Bob” Rice, with whom they celebrated their 51st wedding anniversary. She had two children, Sandra S. Jordan (Buck) of Atlanta, and Charles Gordon Shaw of Columbia, and her beloved step-children, Sandra R. Helms (Dr. Lee), Robert Marvin Rice all of Virginia Beach; as well as 5 grandchildren, Eric & Brian Jordan, Christopher, Katey, and Betsey Helms; 2 great-grandchildren, Corey and Dylan Jordan.

The family of Nora M. Rice created this Life Tributes page to make it easy to share your memories.

A memorial service for Nora M. Rice, of Columbia, will be held...