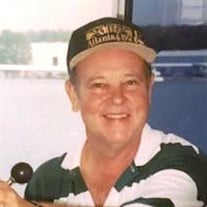 Columbia—Robert “Bob” Eugene Parnell, AKA “Radio Man”, 78, passed away Wednesday, December 5, 2018. He was born in Columbia, SC, on January 29, 1940, to the late Monroe J. Parnell and Eleanor Flowers Parnell. He was a graduate of Columbia High School, “Class of ‘59” and was raised in the Eau Claire area. He followed his lifelong interest in electronics by opening Mid-State Electronics of Columbia in 1961, where it was in business for 54 years; being a major contributor for startup technologies such as broadcast radio at WDPN 103.1; electronic telephone answering service, Medcom; as well as paging, cellular and other wireless fields. In retirement, he still enjoyed tinkering with electronics and his HAM radios, weather stations and solar panels. In his youth, he was a member of the Civil Air Patrol, Amateur Radio “WB4KUJ”, and was awarded Eagle Scout. He was an avid sportsman throughout his life, coaching Dixie Youth Baseball, cheering on the Gamecocks, boating, and fishing. He enjoyed Shagging, traveling, grilling out, gardening, coin collecting, hosting his Annual July 4th Fireworks Extravaganza, spending time with his cat, Mr. Boots, watching the Three Stooges, and telling silly jokes. He was happiest when surrounded by friends and family. He was a very special man with a sparkle in his eyes whose warm smile and welcoming hugs made everyone he met feel like a lifelong friend. He is survived by his wife, Laura Sattler Parnell; son, Robbie (Kim) Parnell; daughters, Mimi Parnell and Candi Wilson. He was preceded in death by his son, Ray Parnell; his brother, Jimmy Parnell; and his sister, Mary Couch. The family thanks and appreciates all those involved with Bobby’s care. The memorial service will be held Sunday, December 9, 2018, at 2:00 pm in the Chapel of Temples-Halloran Funeral Home at Bush River Memorial Gardens, 5400 Bush River Road, Columbia, SC 29212. The family will receive friends following the service. The Reverend Paul Allen will officiate. In lieu of flowers, memorial donations may be made to the National Eagle Scout Association, PO Box 152079, Irving, TX 75015.

The family of Robert E. "Bobby" Parnell created this Life Tributes page to make it easy to share your memories.