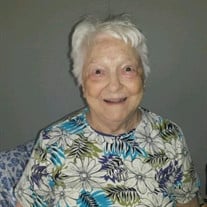 Ruby Viola McGrady Ford died February 2, 2021, at the home of her son, Van Lewis Ford, in Greenwood, SC. She had just celebrated her 100th birthday. Mrs. Ford was the second child of Charles Benjamin McGrady and Alice Myra Scroggie McGrady. Besides her parents, she was predeceased by her husband of 48 years, John Lewis Ford, and all five of her siblings: Janet McGrady Martin, Alice McGrady Burk, James W. McGrady, Donald E. McGrady, and Marian McGrady Seo. Mrs. Ford is survived by her sons, Van Lewis Ford (Linda) of Greenwood, SC, and Robert James Ford (Carmen) of Rion, SC. Also surviving are grandchildren Julie Marie Ford Kirkland (Artie), and James Ford. Great grandchildren surviving are MacKenzie Kirkland and Taylor Kirkland. Graveside services will be held Saturday, February 6, at 2:00 at Bush River Memorial Gardens, 5400 Bush River Road, Columbia, SC 29212. The Rev. Paul E. Aebischer and the Rev. J. Harry Crout will officiate. Please follow COVID guidelines by wearing a mask and maintaining proper distances. Mrs. Ford was a life-long member of Ebenezer Lutheran Church in Columbia, SC. In her younger years, she participated in many church activities and really enjoyed being a chaperone when her sons were involved in youth activities. She and her husband spent years in a square-dancing club. She made all their outfits. Another highlight of their time together was trips in their Airstream Camper. Mrs. Ford, also known as ‘Ruby Dooby,’ worked for many years at White’s Department Store in Dutch Square Mall. Truly artistic in many ways, she started painting in her late 60’s. Ruby’s high school education was interrupted when she contracted tuberculosis. One of her proudest moments was earning her GED when she was in her 70’s. Mrs. Ruby knew no strangers and was always the life of the party. Following her one request that she not be placed in a facility, her sons shared her care in their homes after she was no longer able to live alone. In lieu of flowers, memorials may be made to Ebenezer Lutheran Church Stones of Help, 1301 Richland Street, Columbia, SC 29201.

The family of Ruby Viola McGrady Ford created this Life Tributes page to make it easy to share your memories.