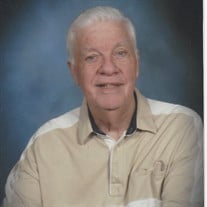 IRMO—William Edward Hollis, 85, of Irmo, SC, was born in Columbia, SC on April 22, 1932, he was the son of the late Edward and Ruth Mixon Hollis. He is survived by his wife of 58 years, Christine Harley Hollis; sister, Mary H. Behlmer and her husband, Richard Behlmer; two sisters-in-law, Marie D. Hollis, and Rose H Stroman, and a host of nieces and nephews. He was a member of Shady Grove United Methodist Church in Irmo, SC, for the past 10 years. William “aka Billy” attended University High School and graduated in 1952. He was voted the most bashful and the friendliest of his class. Upon his graduation, he was drafted into the US Army, serving during the Korean War Conflict and was stationed in Augsberg, Germany. In past years, he worked for Liberty Life Insurance, Atlantic Coast Life Insurance Company, American Family Life Assurance Company, Richland County Sheriff’s Department, and finally as a Bailiff for the Richland County Clerk of Court for the past 26 years, ending his tenure on June 20, 2017. Billy was modest, he was shy but there was mischief in his eye. Billy was a member of the Tanglefoots Square Dance Club, for the past 22 years. He loved square dancing and visited more than a thousand clubs across the US. Billy was a very social guy and loved building friendships with people of influence. At the Courthouse he was known as “The Headknocker” as his Bailiff friends will testify. The visitation will be held on Monday, December 4, 2017 from 10:30-12:00 p.m. at the Temples Halloran Funeral Home, 5400 Bush River Road, Columbia, SC 29212. The funeral service will be held at 12 noon at the funeral home with the Reverend Bob Vincent, officiating. Interment will be held at 2:00 p.m. in Ft. Jackson National Cemetery, 4170 Percival Road, Columbia, SC 29229 with military honors by the US Army. In lieu of flowers, memorials may be made to Shady Grove United Methodist Church, 1918 Shady Grove Road, Irmo, SC 29063.

IRMO&#8212;William Edward Hollis, 85, of Irmo, SC, was born in Columbia, SC on April 22, 1932, he was the son of the late Edward and Ruth Mixon Hollis. He is survived by his wife of 58 years, Christine Harley Hollis; sister, Mary H. Behlmer... View Obituary & Service Information

The family of William Edward Hollis created this Life Tributes page to make it easy to share your memories.