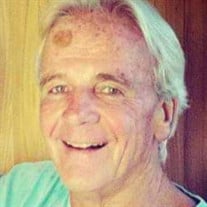 William Michael Mayfield, 71, passed away, September 14th, 2019 in Columbia, South Carolina. Michael was born July 31, 1948, in Bridgeport, West Virginia to the late William and Peggy Mayfield. He grew up in Ft. Lauderdale, Florida where he attended Pinecrest Academy and became an all-American diver. He continued his education at the University of South Carolina with a diving scholarship, graduating with a bachelor’s degree in Education. From there he went on to be a teacher at Winyah Academy in Georgetown, South Carolina, Hand Middle School and Dreher High School in Columbia, South Carolina, and Camp Aspen. He met his late wife, Paula, at Mark Berson’s USC Soccer camp and they married in 1983. In 1988 their son, Wil was born. Michael enjoyed surfing, skateboarding, and mentoring youth. He often traveled down to the coast to surf when there was a good swell. If he wasn’t surfing, you would often find him mentoring skateboarders or cleaning the park in Columbia at Owens Field Skate Park. He loved his dog, Penni, and enjoyed taking her for walks and talking to every person he encountered. He never met a stranger. He is survived by his son, William O. Mayfield; sisters, Susan Mitchell, and Genie Lewis; and the skateboard community of Columbia, South Carolina. He is preceded in death by his wife, Paula Mayfield; mother, Peggy Mayfield; father, William Mayfield and his brother-in-law, Ed Mitchell. A Celebration of Life will be held at 2:00 p.m., Sunday, September 29, 2019, at Shandon United Methodist Church in the gymnasium, 3407 Devine Street, Columbia, South Carolina 29205.

William Michael Mayfield, 71, passed away, September 14th, 2019 in Columbia, South Carolina. Michael was born July 31, 1948, in Bridgeport, West Virginia to the late William and Peggy Mayfield. He grew up in Ft. Lauderdale, Florida where he... View Obituary & Service Information

The family of William Michael Mayfield created this Life Tributes page to make it easy to share your memories.