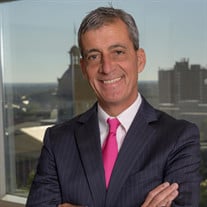 COLUMBIA - William Reade Harbison, age 56, died Sunday, January 24, 2021 after a three-year battle with cancer. He was surrounded by family at his home in Columbia, South Carolina. Born November 2, 1964, in Lexington, Kentucky, he was the son of Reverend Richard T. Harbison and the late Cornelia Bostick Harbison. Will arrived in Pensacola, Florida from Kentucky in the early 1970s as the youngest and most mischievous of his three other siblings. His mother and father often claimed that had Will been the firstborn, he would also have been the last. In spite of his pugnacious intensity and energy, he brought great joy and pride to his parents and siblings. So confident was he in his athletic abilities at Brown Barge Elementary, he challenged three boys to his one for fistfights each day. Day after day, Will continued to get pummeled but was undeterred, always going back for more. Finally, at the urging of the principal, Reverend and Mrs. Harbison put Will in a more regimented program at Episcopal Day School. Will’s main childhood passion was competitive tennis. He traveled the South Eastern states with his tennis buddies and his mother Cornelia in tow to play in tennis tournaments from Miami to Birmingham, from New Orleans to Atlanta. He enjoyed winning dozens of tournaments all over the South, always sporting a floppy white, Gilligan-style hat at his mom’s insistence. During middle school, Will continued playing tennis; played on the EDS basketball team, starred in a Kentucky Fried Chicken commercial, and enjoyed mowing his name in the family lawn. He refined his “Eddie Haskell” like charm that would entertain teachers and Sunday school volunteers for the next decade. While excelling in extracurricular and social activities in middle school, his less than stellar academic performance prompted his parents to put Will back into the public school system for high school. He entered Booker T. Washington High School in the early ‘80s and made lots and lots of new friends, most of which were female. His proudest achievement in high school, being crowned Mr. Washington during his senior year before going off to college. Will graduated from Washington & Lee University with a B.S. in History in 1987 and Washington & Lee Law School in 1990. While at W&L he proudly served as Food Chairman and football bookie for SAE. Will absolutely relished every day as a student at W&L. He cherished and maintained the friendships he made there. This past September, he was able to attend the 35th Annual Ham Jam in Smithfield, Virginia, where once a year Will and his brethren enjoyed golfing, hunting, fishing, eating lots of pork products, and consuming copious amounts of bourbon and wine. A wonderful husband, father, son, brother, and friend. Will asked his wife of 29 years, Liz, to marry him four months after their first date. They were married in Columbia, South Carolina in 1992, where they remained to raise their three children and Will began practicing law. As a father, he fostered his literary passion to his children with weekly, sometimes bi-weekly visits to Happy Book Seller, Barnes & Noble, and the Richland County Library. While he pleaded with them to read My Name is Asher Lev, they refused but rather delighted in his wholehearted playful enthusiasm. He made sure their bedrooms were filled with books, he read to them every night and obligingly watched Sound of Music for countless Sunday nights. Will was a partner at Gallivan, White & Boyd in the Columbia office. While a skilled litigator for nearly 35 years, and known for his scrappiness and determination to win, he was also considered, to be honest, respectful, and fair. He continued to work throughout his aggressive cancer treatments and could often be found napping on John T.’s couch. Above all though, the unfailing loyalty, love, and compassion shown by his friends, fellow colleagues, and co-workers at GWB provided his greatest professional joy. Outside of work, Will enjoyed and struggled with a wide array of interests. He was constantly in search of the perfect hobby, though he never found it. Will loved playing golf with his buddies every week, followed by generous pours of Chardonnay in the locker room. He loved hearing himself talk and never let the truth get in the way of a good story. He kept a spoon in his pocket, always at the ready to stir the pot about anything. He liked to instigate provocative conversation and insisted on debating politics, despite being the sole person to hold a particular conviction. His keen wit and self-deprecating sense of humor was a delight to all. Will is survived by his wife, Elizabeth Holman Harbison; his children, Elizabeth Reade (Brooklyn, NY), Rebecca Blanding (Washington, DC), and William Wiley; his father and stepmother, Dick and Barbara Harbison; his two siblings, Mark (Stuart) Harbison, Jacksonville, FL and Cornelia (Rod) Hoover, Charlotte, NC. He was the son-in-law of Earl and Becky Ellis of Columbia and the late James B. Holman. He is predeceased by his mother, Cornelia Bostick Harbison, and brother Richard Taylor Harbison. He is survived by nine wonderful nieces and nephews, many loving in-laws, outlaws, cousins, family, and friends. He will be missed by beloved dog Billy, and cats, Bertie, Eloise, and Leslie Knope. The family would like to thank the kind nurses at Hospice MSA, the doctors, and the nurses at SCOA and Vanderbilt Medical Center. Due to COVID-19 restrictions, an outdoor memorial service will be held at Downtown Church, Central Energy Building, 2030 Gregg Street, Columbia, SC 29201 at 3:00 p.m. on Thursday, January 28, 2021. All are welcome to attend, however, masks are required, and social distancing is enforced to maintain a safe environment for all. It is also possible to join from your car, park on either side of the back lawn, and connect via 107.9 FM radio station. The service will be live-streamed at https://vimeo.com/505246801 In lieu of flowers, donations may be made to Downtown Church https://www.downtownchurch.me/give

COLUMBIA - William Reade Harbison, age 56, died Sunday, January 24, 2021 after a three-year battle with cancer. He was surrounded by family at his home in Columbia, South Carolina. Born November 2, 1964, in Lexington, Kentucky, he was the... View Obituary & Service Information

The family of William Reade Harbison created this Life Tributes page to make it easy to share your memories.